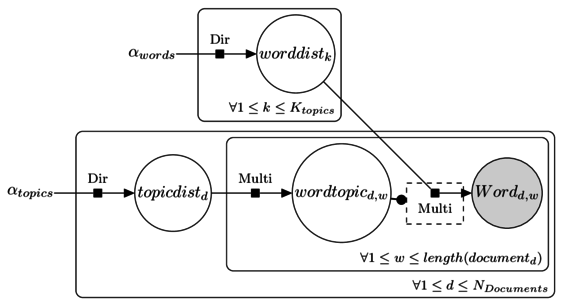 The image above was created using TiKZ-bayesnet (TiKZ is super-fun by the way) for LaTeX, which actually provides an LDA example. I’ve taken their example here and modified the variable names and layout slightly to match my code.

Each box is a “plate” which signifies that the structure should be repeated according to the sequence in the plate’s lower right corner. Think of it like a “for-loop” for graphs.

Now I’ll go over all these variables.

Put all together, the model looks like this in JAGS:

Of the four variables here (excluding hyperparameters), three are unobserved, which means the model learns them. I think the most interesting one is $worddist_k$ which will show us what each topic looks like. Here’s an example of what topics might look like visualized as a word cloud. In this example I took the first paragraphs of the “Dog”, “Cat”, and “Mouse” Wikipedia article.

You would hope that the three topics could be separated cleanly—showing mainly “cat” in one topic, “dog” in another, and “mouse”/“mice” in the last—, but I currently haven’t had all that much success with this. This example is also kind of cheating, too, in that maybe for this case I could just do supervised learning with a naive Bayes classifier since I know how all the documents should be clustered.

I initially tried using LDA to cluster different lines from my system log. I later moved to using a dendrogram clustering system using the “F-measure” or “Word Error Rate”, which worked much better both speed and accuracy wise. I may talk about this in a later post.

In the code I’ve included below I also show my failed attempt to detect the number of clusters by fitting multiple models with different numbers of clusters and measuring deviance (something similar to a penalized version of log likelihood, if I understand correctly) to see which fits best. (I may try this with Stan in the future, which will directly give you the log likelihood.) I also show how you can use a library like snowfall to fit multiple JAGS models in parallel. Sampling is embarrassingly parrallel, so there’s no reason to leave your other CPU cores idle while one does all the work.

I think LDA is more interesting when you’re studying topics, instead of trying to simply cluster documents. Ideally I’d like to do more of an unbounded or hierarchical LDA, where the number of topics could vary (or in the case of hierarchical LDA, topics have child topics), but I’ve yet to implement this. What I really liked about the Church programming language was that implementing unbounded models was fairly straightforward. Not so in JAGS. This may be possible to implement in Stan, which would be fun and interesting to do at some point.