Org-mode is a great tool for organizing your todo lists, ideas, and notes. One of the pain points for me, though, is keeping all of my notes in the proper categories. 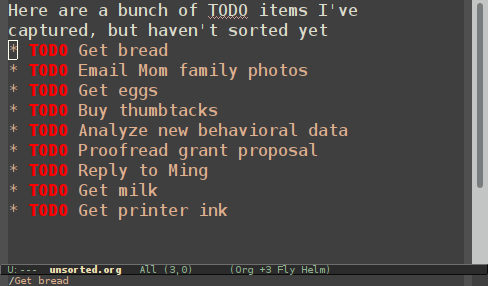 Ideally, I want these tasks to be sorted.

Normal refiling can be pretty slow. In this post, I'll show how to use the hydra package with simple macros and elisp functions to achieve fast refiling (and jumping) with just one or two keystrokes. The end result (code here) looks like this:

Why use hydras to refile?

Using hydras allow you to quickly repeat commands. Using nested hydras you can make most refile targets available in one or two keystrokes. When you're refiling a bunch of items, this goes from typing

How to refile with hydra

Refiling to a specified location

If you look at the documentation for org-refile, you'll see there's an optional argument RFLOC that allows you to programmatically specify a refile location. It doesn't mention what format it should be in, but a quick search brings up a Stack Exchange answer that shows the format and gives the following example of how to use it:

This is great! We can use this to bind keys to expressions like (my/refile "someday-maybe.org" "Someday/Maybe"). One problem with this is that we'd have to keep pressing the hotkeys over and over again to refile a bunch of tasks in a row.

So let's use a hydra to make refiling much faster.

For each keybinding, we provide:

I also use the :foreign-keys key to continue running the hydra, so I can move to a headline using C-n and C-p without exiting the hydra and having to call it again.

With just these commands, you can already begin to refile quickly.

But what happens when you have a lot of headlines to refile to? If you keep adding headlines, you might get a giant hydra like this:

You might find that you run out of keybindings fairly quickly. Here we had to start using uppercase letters because lowercase keys were overlapping.

By using nested hydras we can break refiling into two keystrokes: The first for the file and the second for the headline. This moves us from using 26 keys to $26^2 = 676$ possible locations to refile to (and if you use uppercase it's 2704!).

Here's how you can do a simple nested hydra, for refiling into three files (File A, B, and C), each with two headlines (roughly named "1" and "2").

I find the easiest way to construct a nested hydra is to use the :after-exit keyword to pop back to the parent hydra.

We can see that refiling again is pretty straightforward.

One problem with writing hydras this way is that it gets ugly pretty quickly, with a lot of redundant code. Notice how we repeatedly have to specify the file in each file's hydra, even though it doesn't change within it. Also note that the hydra hint is the same as the headline.

We can write an Elisp macro, to do the heavy lifting in creating our hydras, so we only have to specify a file once:

Great! Now our code is a bit cleaner, and adding new refile targets is as easy as adding a ("Key" . "Headline") pair to a list.

Using the previous code allows you to do most of your refiling tasks quickly and easily. I've made some modifications to the code to have the following features.

All the code for this is available here, as a gist.

Why did I use hydras to refile in the first place? There were a few problems I was having with org-refile. Some of these can be solved with some customizations that I wasn't aware of before.

I still use normal org-refile somewhat frequently, but refiling and jumping using hydras saves me a fair amount of keystrokes

To celebrate this leap day, I just released my first Emacs package called ace-mc which allows you to quickly and easily add as well as remove multiple-cursors mode cursors using ace-jump-mode.

It's available on MELPA now! So installing it is as easy as M-x package-install RET ace-mc

Documentation is available on the GitHub page, but here are a couple screencasts:

The main reason I made this package is because adding cursors with mc/mark-next-like-this or mc/mark-all-like-this-dwim doesn't work super well if you have a lot of potential matches. For example, if I'm trying to rename a variable "i", there's often a bunch of i's in other words that I don't want to touch. While multiple-cursors does make it possible to add multiple cursors using the mouse, this often is a bit of a hassle for me.

It seems like some people are already using it. In the time it's been out, one person already reported a bug (which is now fixed) and a couple people have already asked if I'll be adding avy support.

I eventually plan to add avy support. I first off used ace-jump-mode as it's the package I use currently. I understand, though, that many people have switched to avy. I've already messed around with adding a "add cursor" action to avy-dispatch-alist. The tricky, thing, though is how multiple-cursors deals with read-prompts. And since avy provides many types of jumping styles in separate commands, I'm not sure how best to add ace-mc support for all of them. But as I keep playing around with avy, I plan to finally switch to it.

Anyways, give ace-mc a try, and if you have any improvements or suggestions, let me know! 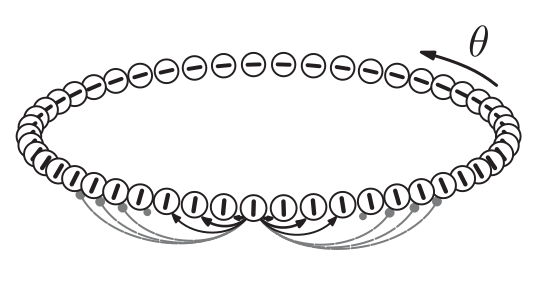 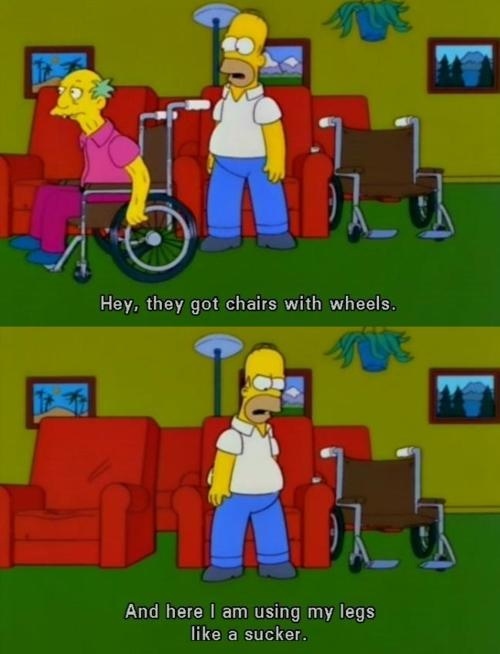