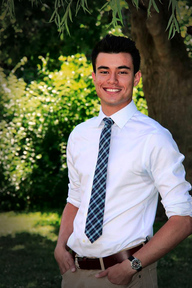 Hi! I'm Josh Mōller-Mara and I'm currently a third year graduate student studying neural science at NYU. I'm in the "NYU Doctoral Program in Neuroscience Shanghai Track", which basically means that while I did my coursework and a rotation in New York, my thesis work is being done in Shanghai. As part of the Erlich lab, I'm studying the neuroscience of value-based decision-making in rats and mice.

Previously, I was a post-baccalaureate student at the UC Berkeley Neuroeconomics Laboratory in the Haas School of Business, where I studied the neural basis of social cognition. In a project under Professor Ming Hsu, we were looking to understand how people make decisions with social information using economic games and fMRI.

I graduated in 2013 from UC Berkeley with majors in Computer Science, Cognitive Science, and Statistics, which were the three fastest growing majors at UC Berkeley at the time. My main interest in them was in their perspectives and tools in understanding how we think and make decisions.

And waaay back when I used to work as a Unix Systems Administrator for Rescomp where I was the only sysadmin who used Emacs and actually checked his email using GNUS (I use notmuch now). Yay Emacs! I mostly worked on security projects, such as integrating two-factor authentication with our infrastructure.

Back when I was in Berkeley, I used to practice parkour with the Cal Parkour group. If you're ever in the area, check out the Thursday sessions at 6pm!

What's with the macron?

It was originally just for pronunciation purposes; that is, /ˈmoʊlər/, not /ˈmɑːlər/. Now it's just a ploy to make my name more memorable by putting something distinctive in it. Why does it look all weird in the title of this website? Because it's hard to find fonts with large character sets.

My dad, Ken Möller, uses an umlaut, but still pronounces it the same. Hahaha.